A Rebus is a puzzle where pictures are used to represent words. Rebus Theatre offer a puzzle of pictures and stories of the challenges faced by people with Disability, Mental Illness or lived experience of any type of marginalisation, and invite their audience to help find solutions.

that raise awareness about social issues. 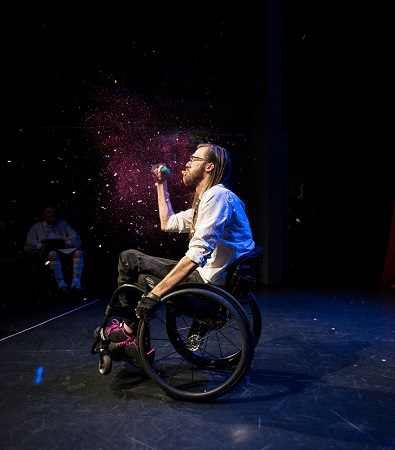 Daniel Savage performance as part of the 'All In' variety showcase. Photographer: Mark Turner, 2016.

Rebus is a company of people with and without disabilities who came together to develop workplace-training around inclusion, equity, and diversity. Funded by an ACT Innovations grant, a group of ten actors (five with disabilities and five without) worked with theatre-maker Robin Davidson to develop Forum Theatre shows based on the lived experiences of the cast. The model consists of a short play presented to an audience twice, with the second performance giving audience members an opportunity to identify how things could be done differently, stop the action and replace one of the actors to improvise a better outcome.

Training sessions are delivered by four actors and one facilitator, and presented to an audience of anywhere from 20-100 participants. The company has delivered this training for both ACT and Australian Government departments, and presented at conferences and festivals around Australia.

Rebus was accepted into the Mill House Social Enterprise accelerator

in July 2017 to further develop a business case and marketing strategy for their workplace training. For more information or to discuss your organisation's workplace training needs, email info@rebustheatre.com

“I found the REBUS forum theatre performances thought provoking and challenging. Whist the performances are definitely entertaining, the capacity to challenge and cause the audience to question their own behaviour and the behaviour of others is for me the real value.” Mary Porter AM MLA 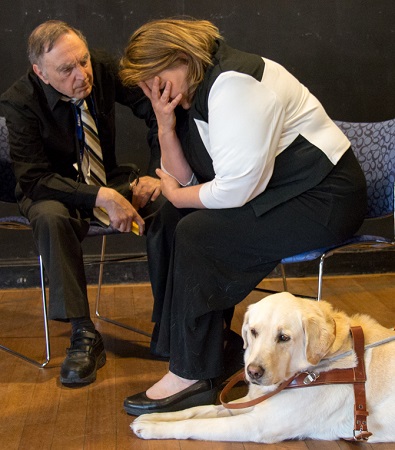 All In: A mixed ability variety night in celebration of International Day for People with a Disability

In December 2016 Rebus produced a variety night by people with and without disabilities at the Tuggeranong Arts Centre. Funded by artsACT, All In resulted in three public performances and was filmed for ABC News. This celebration of the International Day for People with a Disability was a truly inclusive event, with over forty performers, the majority of whom identified as a person with a disability. Acts included theatre, music, dance, burlesque and circus.

This inclusive showcase  presented a major opportunity for the artists involved to perform and connect with new audiences, and be seen for their talent and skills. For some performers this was their first public performance, for others their first paid performance, and some were seasoned professional performers.

The performances were received very well with comments such as "what an amazing line up" and "so much talent in this show, thanks for a fantastic night" from audience members. Several artists who performed in All In have since been engaged in mainstream arts productions across Canberra.

For Cara Matthews, Rebus Creative Producer and Artistic Director, All In was her first major directing experience. Cara has since been contracted to lead classes for L'Arche Genesaret

and asked to speak at a number of female leadership groups across Australia.

"Thank you. It was a privilege to have been a part of this performance. Thank you for all you did for us and the broader participants in this great show." - Stewart Betts, L’Arche Genesaret 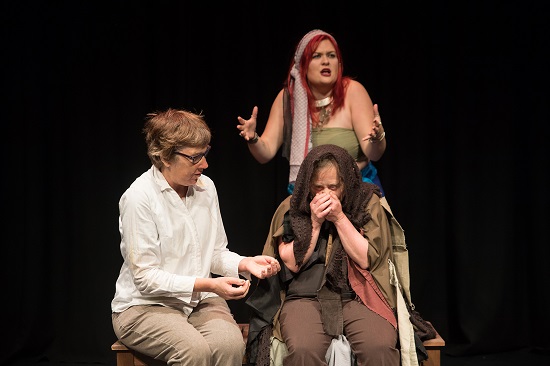 L'Arche Geneseret performance as part of the 'All In' variety showcase. Photographer: Mark Turner, 2016.